The orchestra provides the opportunity for all pupils who receive instrumental lessons to play as part of an ensemble.  The orchestra play a wide variety of music from classical, popular, Marches and film music.

The orchestra played an integral part in our Spring Concert performing many of the pieces which they had rehearsed throughout the year.  This was a wonderful opportunity to perform to family and friends and show case their achievements.  Many instrumentalists also performed in their smaller ensemble groups including the Flute ensemble, Clarinet ensemble, String group and Brass ensemble.

In March this year the music department was hive of activity as we were preparing for our local music festival. We had a vast number of pupils entered in many different classes including solos, ensembles, orchestra and windband. We had a very successful week of competing and brought home 8 trophies. The adjudicator was very impressed with the variety music performed and number of pupils who entered. She wrote many encouraging comments about out performances but also areas for improvement.

The school Orchestra was placed first in their class with their performance of ‘Pirates of the Caribbean’ and ‘Beauty and Beast’.  The windband came 2nd in their class performing ‘Dam Busters March’ and ‘You’ve Got a Friend in Me’.

Many of our instrumentalists were also place in their respective solo classes as was our clarinet ensemble. See their results below:

We had the create privilege of being asked to perform at the Ulster Teacher Union centenary event in the Ulster Hall on 23rd January.  The event was a celebration of the arts including school from across Northern Ireland.  We were honoured to be asked to represent post primary school to show what standard can be achieved when pupils enter secondary education.  Over 40 pupils took part in the event and it was an amazing experience to be able to perform in the Ulster Hall.  The Orchestra performed two piece ‘The Dam Busters March’ by Eric Coates and the theme from the ‘Pirates of the Caribbean’. 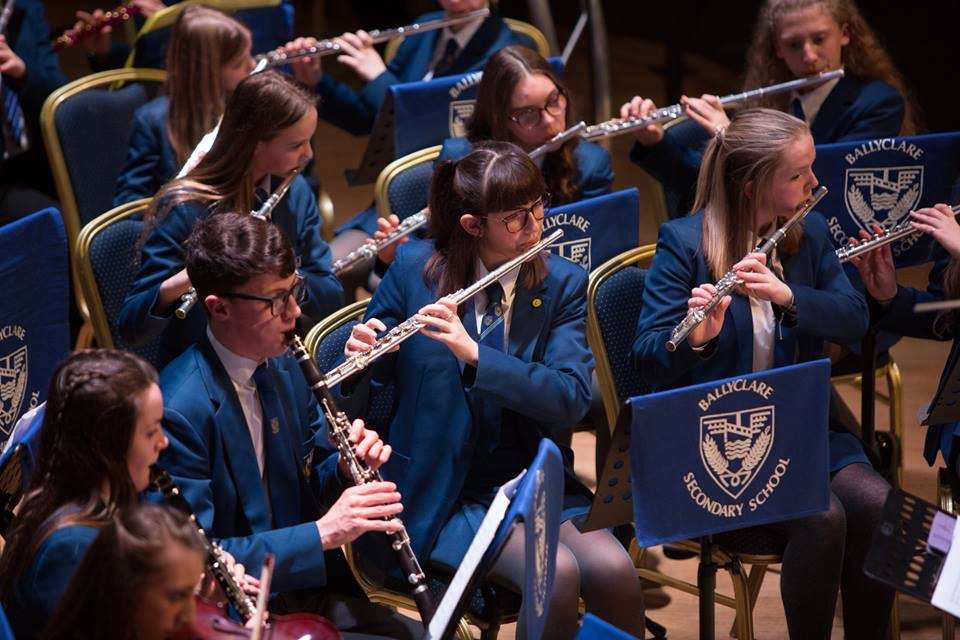